Bar None, set in the heart of New York City, is an edge-of-your-seat mystery that features Jude Dillane, owner of The Corner Lounge on 10th Street and Avenue B. When Jude finds her friend and landlord Thomas “Sully” Sullivan’s work pal, Ed Molina, dead in a pool of blood in Sully’s apartment, she’s sure it wasn’t suicide as the police suspect. Jude investigates and adds murder to her plate as she delves into a case of major fraud at the Big City Food Bank.

I had so much fun reading this and I’m officially calling it “cozy-ish mystery” because it isn’t quite cozy and not quite full-on thriller/suspense. It has many elements of a cozy mystery. For example, Jude, the protagonist is not a professional detective, but rather a bartender and restaurant owner. Also, there isn’t really any gore. However, it’s less cozy in that it takes place in New York (although, I would argue that you do get the family/small-town vibe with Jude’s work friends) and the multiple deaths put me a little more on edge than other cozies I’ve read.

I love bartenders and mixology and you get a little bit of this in the book. I think part of me missed sitting at the bar talking to the bartender, trying new liquors, and watching the bartenders create cool stuff.

Overall, this is a fairly quick read, a fun mystery, with a likable-because-of-how-honest-and-real-she-is protagonist. For figuring out the mystery, it’s not hard to figure out whodunnit, but I didn’t figure out the specific why until it was revealed. 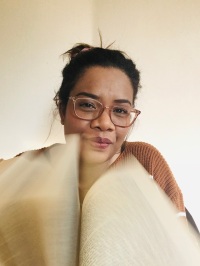 Ellekimberly's ReaderRank
Ellekimberly has reviewed 590 books with an average rating of 4.222 out of 5.
277 people have found Ellekimberly's written reviews to be helpful on Goodreads.
See more...

We Take a Bite Out of Books

The Bookshelf Edit
My Bookish Bliss

everything books, served with a side of sarcasm.

a book blog to diversify your reading!

Just a girl fangirling over literature......

Reading under the melody of moonlight

books, music, and everything in between

come in from the storm

My thoughts and opinions on all things bookish

from fantasy to classics

A BOOK BLOG FOR ALL MY DARK & TWISTY READS